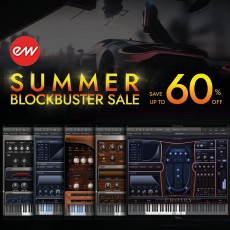 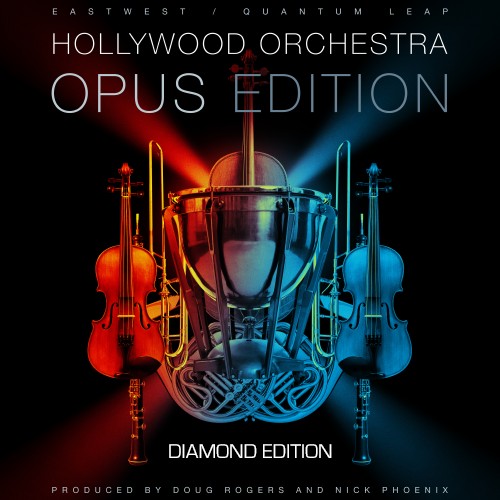 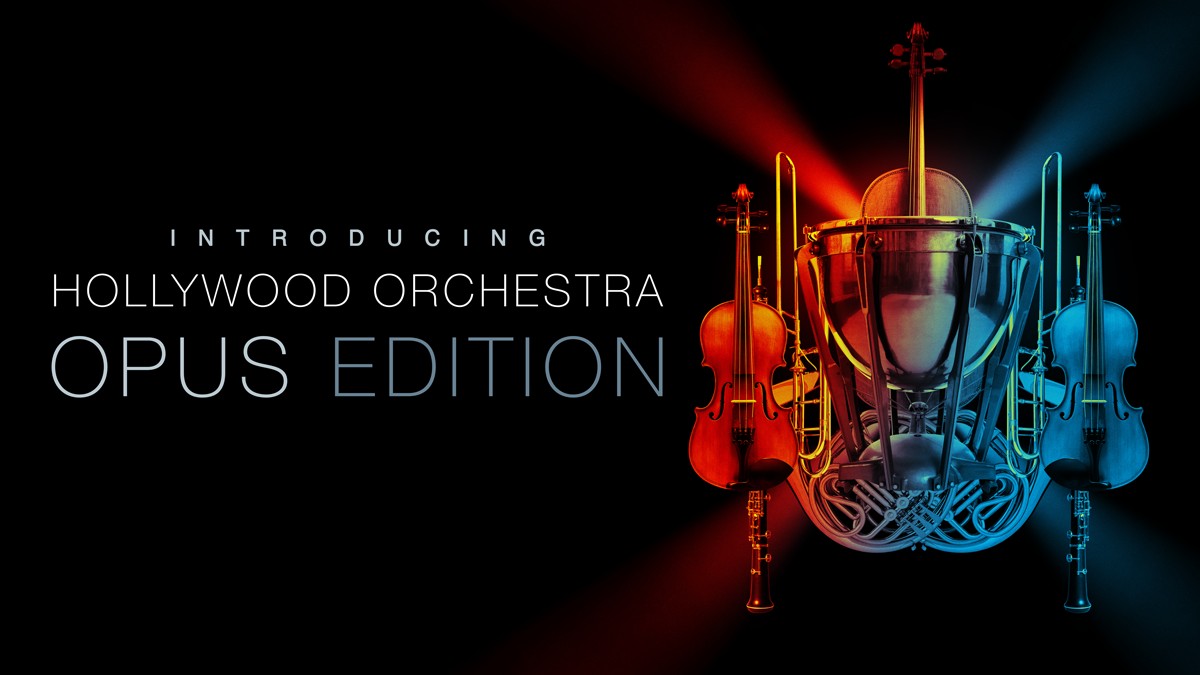 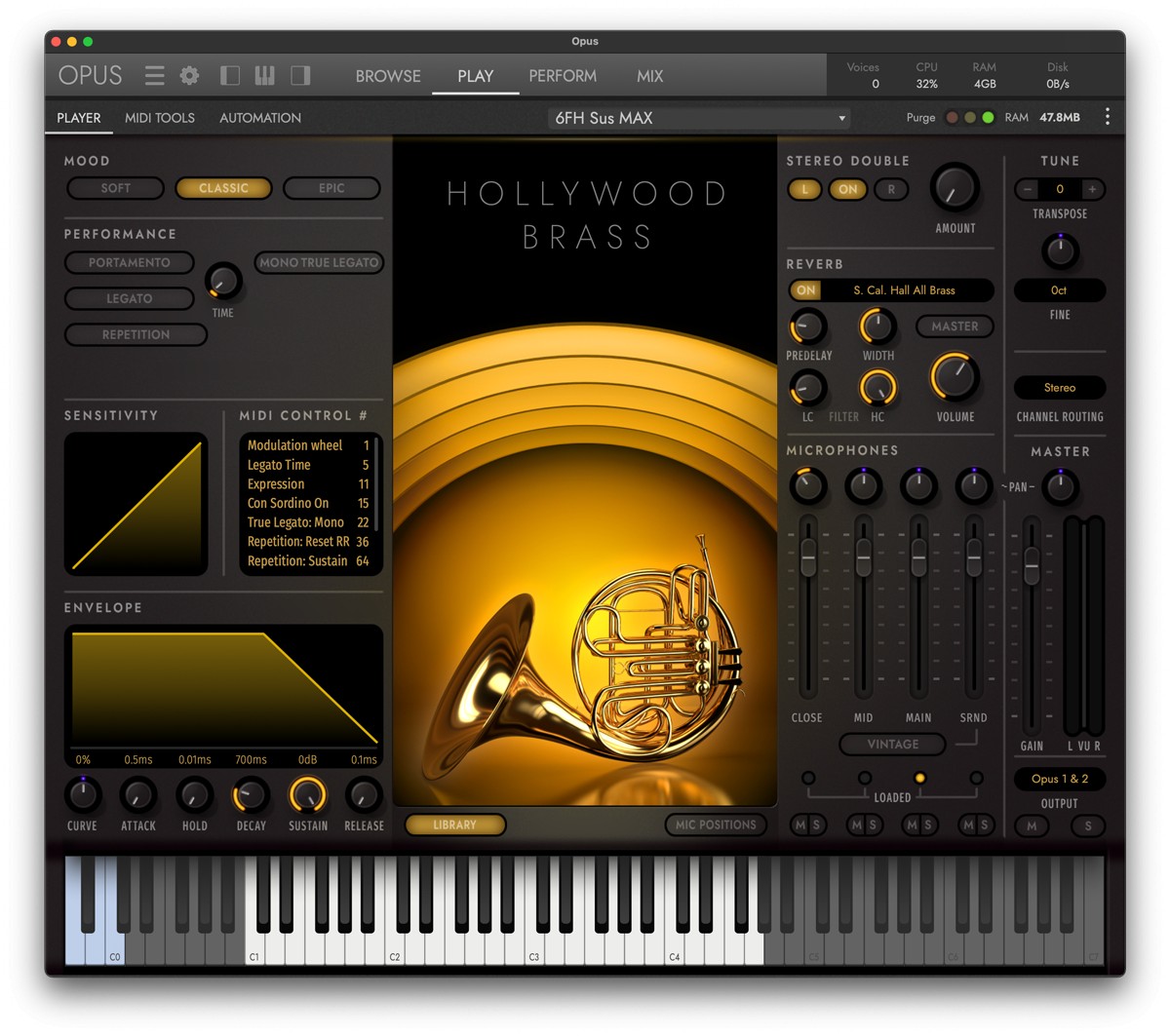 "The new 18 violins are an alternate to the first 16 violins of the original library. They have a different sound," says producer Nick Phoenix, "The players are different. The vibrato is different. The legato is the best we have ever recorded. They work well with the existing collection or as a replacement for the original 1st violins. The new 2 tenor trombones have a completely different sound from the 3 trombones in the original collection. The new trombones are warm, full, and extremely precise. 2 trumpets were recorded again using two of the best players in the Hollywood film score scene. The legato is blazing at high velocities and sounds like a live performance." 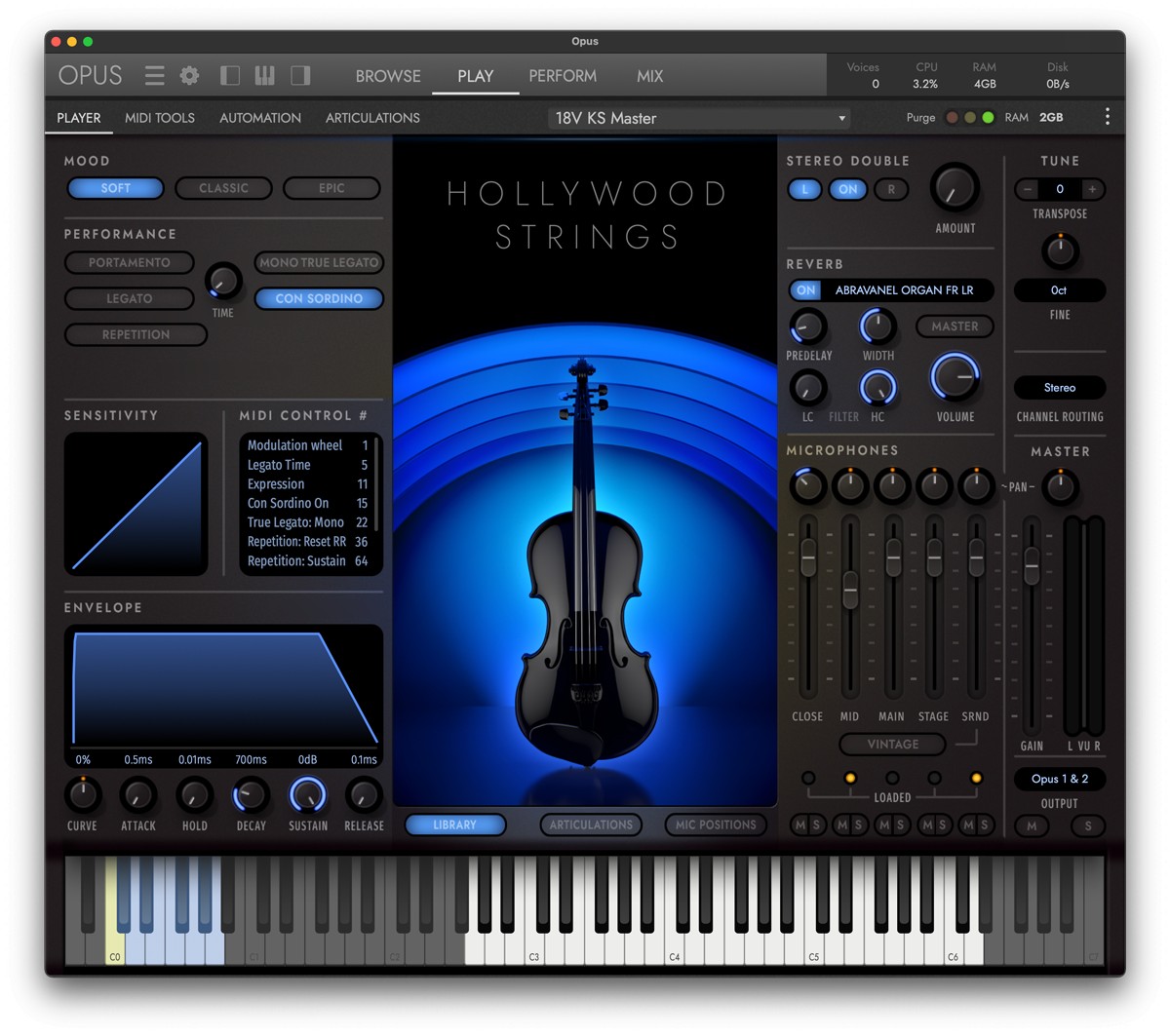 The programming of the original content from Hollywood Orchestra has been updated to take advantage of the features included in the Opus software engine, as well as the Hollywood Solo Instrument Series (now included in this expansion). Particular focus was placed on Hollywood Orchestral Woodwinds. After improving the original woodwinds, new ensembles were recorded, including 3 bassoons, 3 clarinets, and 3 flutes. "Once again, this was a huge success because of the quality of the players," says Phoenix, "Each woodwind ensemble works together on a regular basis and the tuning and timing are immaculate. These new recordings are unmatched in the virtual instruments world. The Opus Edition also includes new string, brass and wind multi ensembles that have a unique fat sound that captures the tuning of a large orchestra playing together in a live setting."

Powerful control features include Master key-switches where all articulations can be fully customized in the OPUS articulation palette. You can also customize the sound of each instrument using the new MOODS feature. Classic Mood is the original Hollywood Orchestra sound. Soft Mood modifies the sound for slower, more emotional passages. Epic Mood does the opposite, giving you a sound perfectly suited for your next Action Adventure score. Each mood changes the settings and the look of the interface, which has been completely redesigned and stylized for Hollywood Strings, Hollywood Brass, Hollywood Orchestral Woodwinds, Hollywood Percussion, Hollywood Solo Violin, Hollywood Solo Cello, and Hollywood Harp.

In addition, EW simplified all instrument versions down to LITE and MAX, making Hollywood Strings in particular much easier to navigate. On less powerful systems use the LITE versions, and on more powerful systems use the MAX versions. Although the MOODS feature works on all versions, it was programmed for the Diamond editions that include all mic positions mixed by Shawn Murphy. 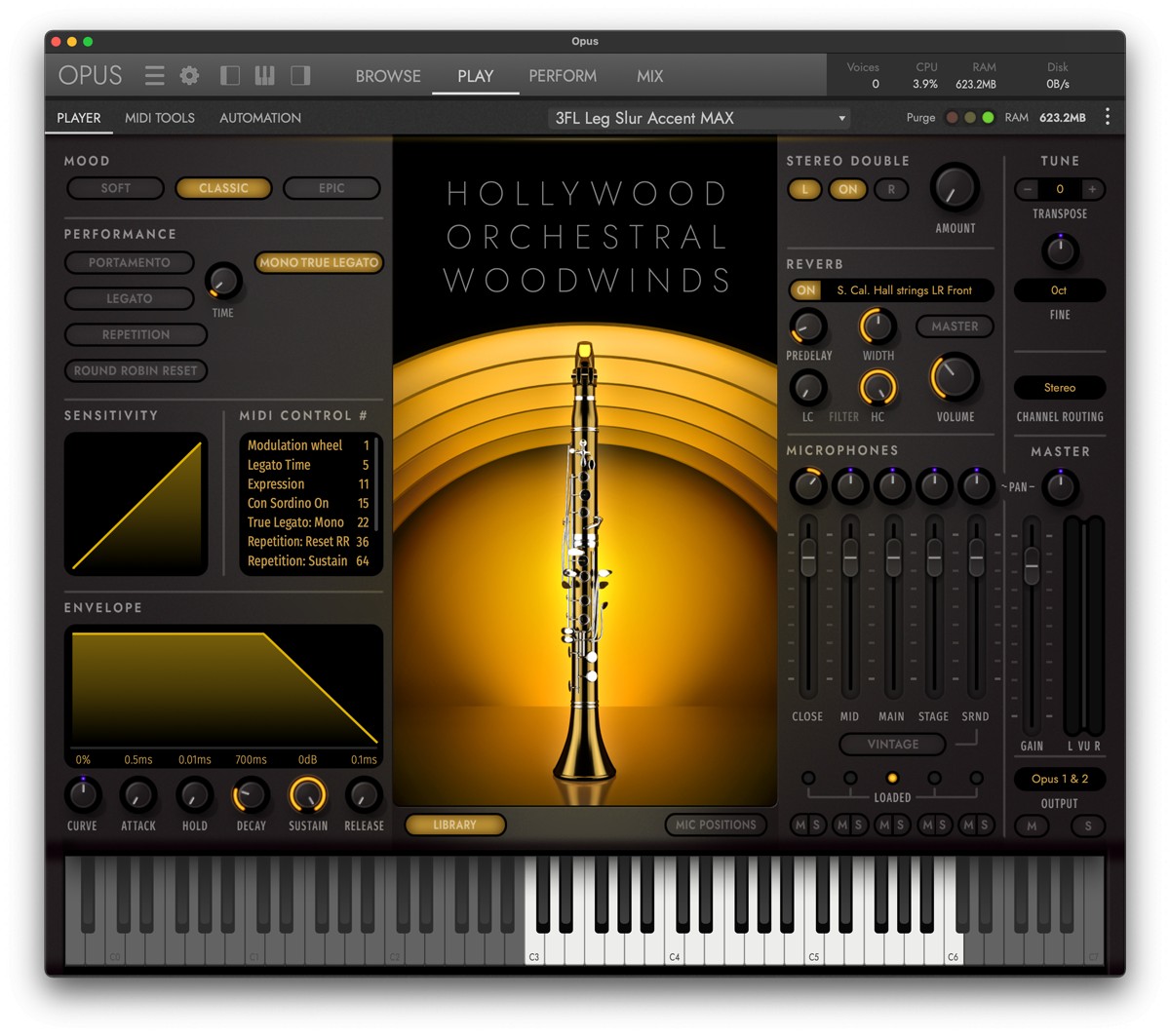 Of course, multiple Academy Award and BAFTA winner Shawn Murphy was brought back to sound engineer all of the recordings. Shawn Murphy is one of the most prolific sound engineers and mixers in the history of cinema. Just some of his over 500 feature film credits include the Star Wars franchise (The Rise of Skywalker, The Last Jedi, The Force Awakens, Revenge of the Sith, Attack of the Clones, The Phantom Menace), The Hunger Games franchise, Harry Potter and the Prisoner of Azkaban, Jurassic Park and The Lost World, Titanic, Schindler's List, Saving Private Ryan, Mission: Impossible, Apollo 13, the Indiana Jones franchise (Kingdom of the Crystal Skull, Indiana Jones and The Last Crusade), and the Fantastic Beasts franchise. 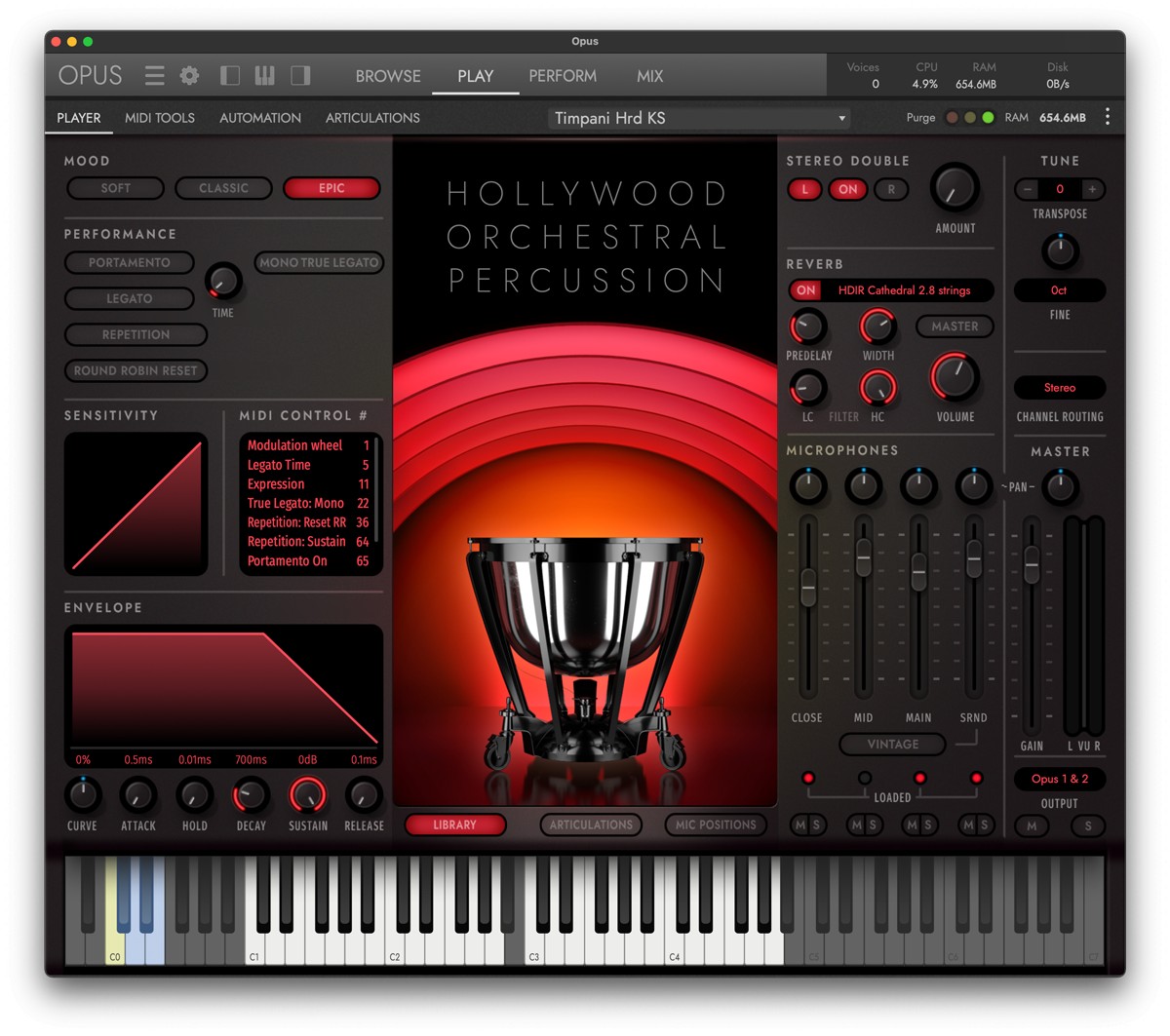 The OPUS software engine replaces PLAY and has been years in development. "Many improvements were made to the PLAY software engine over the last decade but we suddenly had a unique opportunity," says producer Doug Rogers, "we were able to bring Wolfgang Kundrus in as head of software development. He was the mastermind behind the creation of Cubase, Nuendo, and Studio One. Then we were able to bring in Wolfgang Schneider, the creator of Kontakt. With these two titans of music software development now on our team, we decided it was time to develop a brand new software engine from the ground up. The OPUS software engine is the realization of this effort. Not only is it faster, more powerful, more flexible, and better looking than PLAY, it comes with some incredible new features such as individual instrument downloads, customized key-switches, new effects for the mixer page, scaleable retina GUI upgrades for legacy products, a powerful new script language, and many more features that allow you to completely customize the sound of each instrument. It's one of the most exciting developments in the history of our company and will be the launching pad for many exciting new products in the future."

Create full-scale orchestral music with complex arrangements by playing a few simple chords with one hand and shaping expression with the other. Developed in collaboration with Sonuscore, Hollywood Orchestrator used all the instruments in Hollywood Orchestra Opus Edition to create realtime arrangements based on your MIDI input with our Innovative Scoring Engine. 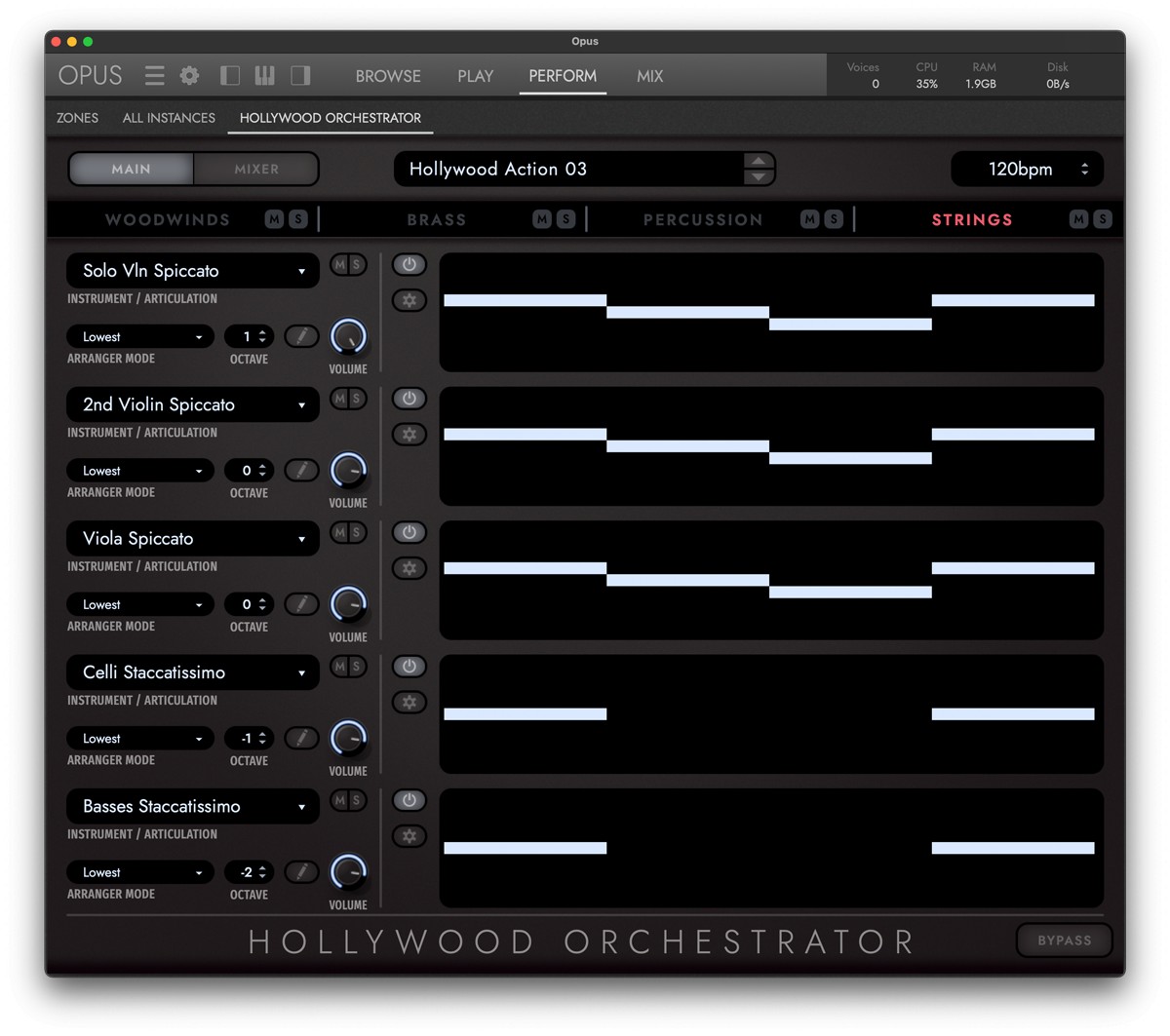 Compose a Blockbuster Soundtrack in Seconds

With over 500 customizable presets, you can instantly create music in the style of Hollywood's greatest composers. Select from Ensemble presets to quickly create rich orchestral arrangements. With Ostinato presets, you can build rhythmic tension in different meters or create moving melodic lines by only changing a few notes. With Score, classic Hollywood orchestrations become an endless source of inspiration. Create your own User presets by modifying existing presets or build your own ensembles from scratch! 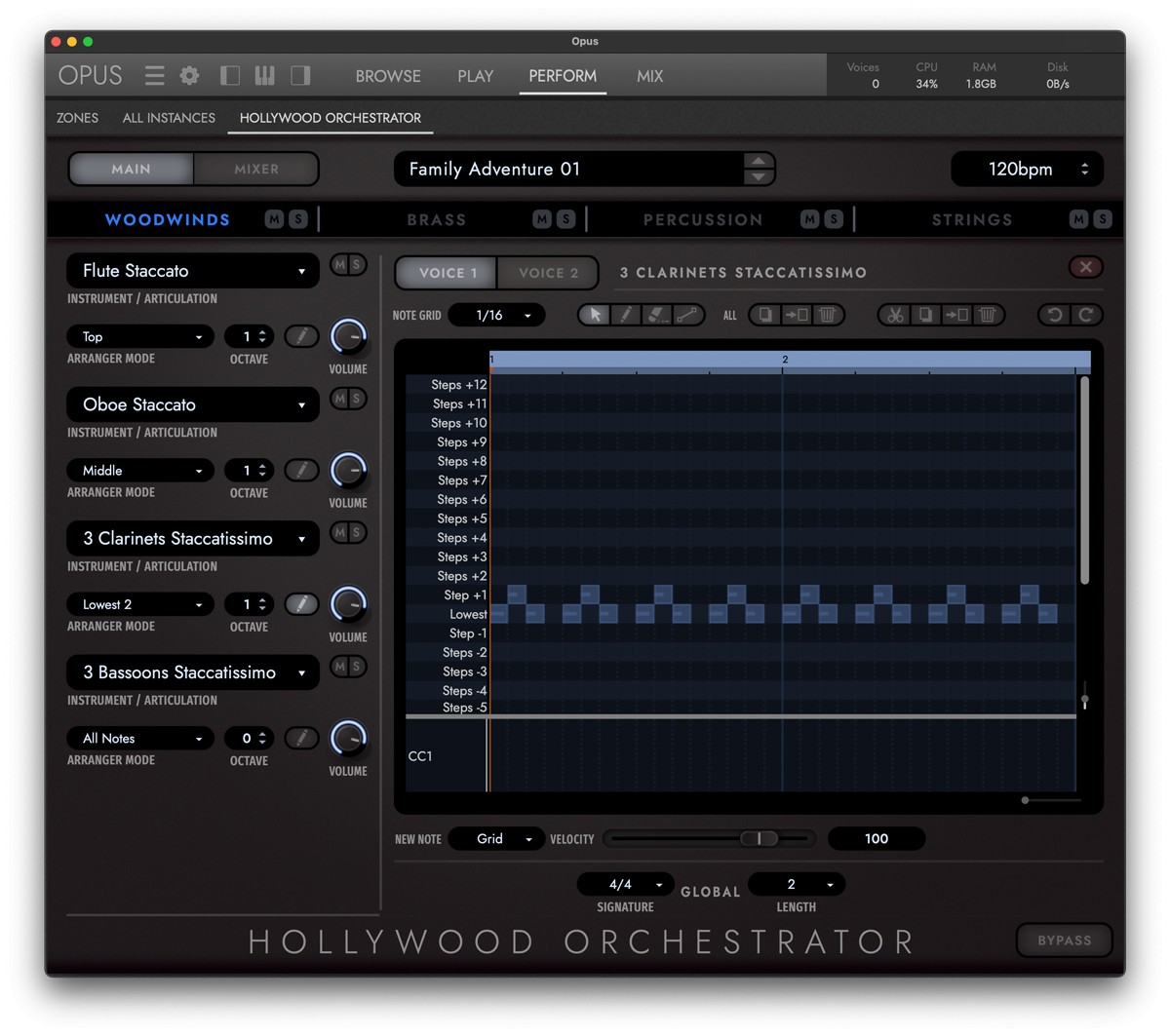 At the heart of Hollywood Orchestrator is the innovative Scoring Engine, which can produce results ranging from a basic string arrangement, to very complex orchestrations played by the full orchestra. It achieves this in a two-step process by first modifying the MIDI input with a Note Selection process, then sending those note selections to a powerful Step Sequencer where chords are played with the programmed rhythms. If you want to take things a step further, you can optionally active our step sequencers. Each slot has one of them. They take, whatever the note selection process outputs, and manipulate that. If you program a rhythmic pattern into the sequencers and play a C-Major chord, the sequencers will take the notes from the note selection and play the chord with that rhythm. 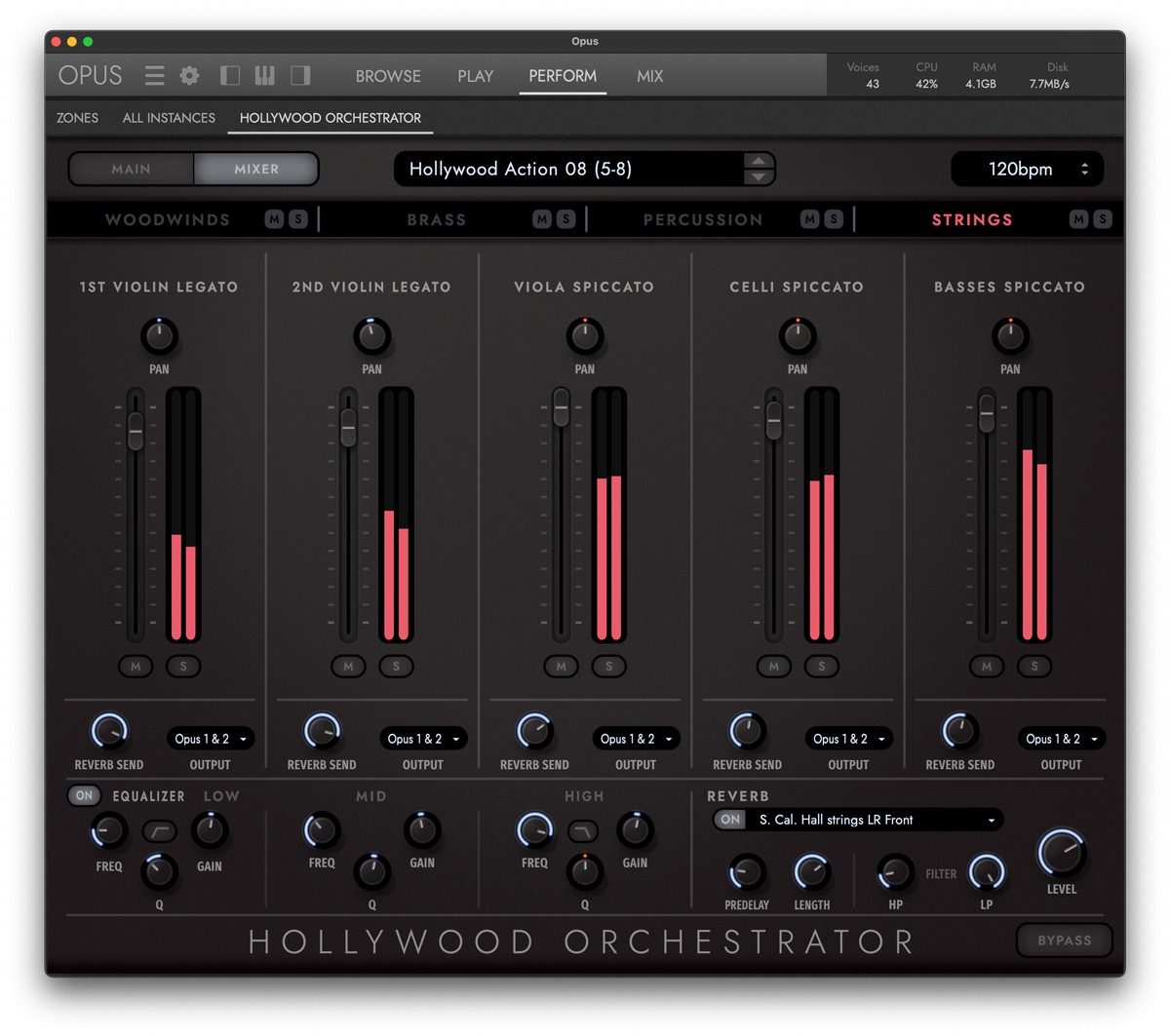 In the Mixer section, refine the final output of each instrument by adjusting the volume, pan, equalization, reverb preset, reverb send amounts, and other reverb controls like pre-delay, length, and filters.