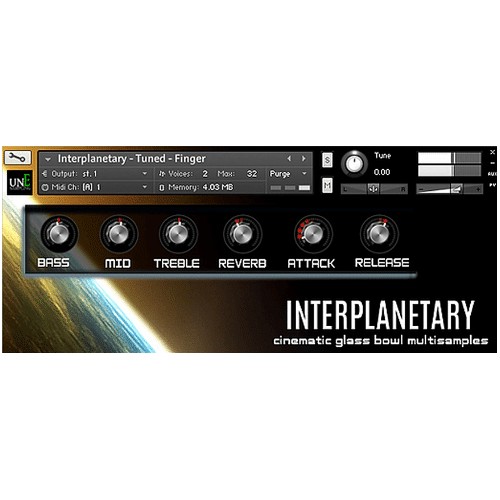 For this instrument we struck the bowl with fingers, sticks, and mallets and each patch not only contains 6 round robins, but has also been carefully tuned to give you maximum flexibility as a composer.

The 16 patches cover a wide variety of playing styles including the tuned struck patches mentioned above as well as etheral pads and even a couple of patches we derived from bowing the bowl with a cello bow.

For an added bonus, there is also a low and hard hitting multisampled analogue synth bass patch which is good for underlaying these instruments... or the instruments / libraries of your choosing.

Combine Interplanetary with the arpeggiator of your choice and you're sure to be whisked off to another planet.  When used as a traditional instrument, the bowl also has a very interesting ethnic quality which is well suited to many types of music and scoring.

Please note: The FULL version of Kontakt 5.3.1 is required.