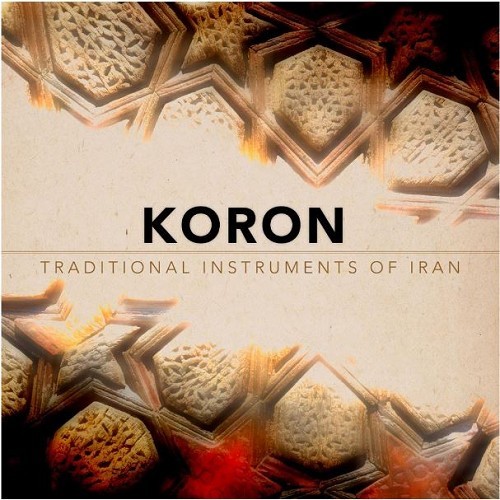 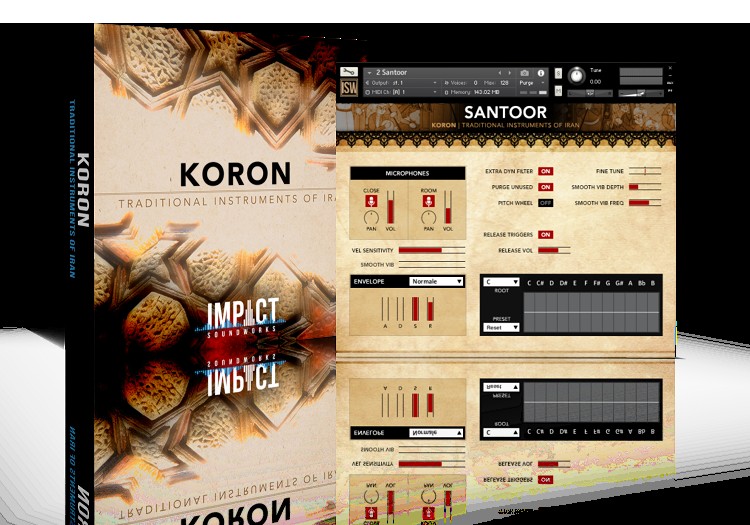 "Koron" is a traditional Iranian musical term that refers to notes a quarter-step lower in pitch. Using these quarter tone intervals is a distinguishing feature of Iranian and other Eastern traditional music. This sample library pays tribute to that concept, and is designed to capture the essence of Iran’s rich musical forms and history, while also breaking the barriers between Eastern and Western music by giving composers new timbres and a new way to view music.

Koron began as the idea of Siavash Mozaffari, who raised funds for a ‘sonic journey’ to Iran. Sia's goal was to share the sounds of Iran’s traditional instruments by turning them into virtual tools for any composer to use. We loved this idea and connected with Sia to expand the scope and depth of the project.

Over 2 years later, collaboration has resulted in one of the deepest world instrument libraries ever released. Koron includes 10 instruments – 5 melodic, 5 percussive – with over 17,000 samples in total. We present both deep multisamples, including multiple dynamics, round robins, and legato transitions, as well as extensive percussive hits and techniques, plus over 1,200 performances and phrases.

Besides this staggering pool of samples, we’ve designed Kontakt patches with our latest script techniques such as Total Articulation Control Technology (TACT)* for custom mapping, and phrase editing right within Kontakt itself. Together with Sia, we’ve also included pictures and information about every instrument recorded, so you can learn more about their construction, history, and playing style.

One of our core goals at Impact Soundworks is to sample and develop virtual instruments outside the standard Western repertoire, and Koron is the most extensive fulfillment of that goal yet. We hope you will enjoy playing it as much as we enjoyed creating it, and look forward to hearing what you write!

Since Impact Soundworks’ first library in 2007, we’ve committed to deep-sampling in all our virtual instruments. This means recording as many dynamics, round robins, articulations, and mic positions as necessary to best capture the essence of acoustic instruments and ensembles. Though it takes much longer, we think this approach gives the best possible results.

The drawback to deep-sampling is that it can be overwhelming! Even though modern computers can easily handle many gigabytes of sounds, organizing lots of articulations and playing techniques is no easy task. Faced with so many options, composers may find it difficult to find the right articulation or adapt it for their particular MIDI setup.

After producing dozens of sample libraries with a variety of disparate articulation systems, we decided to create a complete solution to this problem: Total Articulation Control Technology, or TACT.

Design Goals
TACT was built to achieve goals for both us (as developers) and you (the user!)

Provide a consistent interface for managing articulations, located in a separate tab one click away in ANY instrument
Give users tons of control over exactly how articulations are triggered: velocity, MIDI CC, keyswitch, key range, pedal
Offer ways to adjust each articulation’s dynamics, offset, and legato interaction (where applicable)
Make it extremely easy for users to create an advanced mapping setup with just a couple clicks
Save us (ISW) resources by alleviating the need to create a new articulation system in each library

Finding a way to offer deep control for advanced users while also making it easy to use is something we’ve always aimed for in all of our libraries. Restricting control can make things simpler, but we want to accommodate all producers & composers, even those with unusual MIDI setups or non-standard DAWs. That means flexibility is a top priority.

The value of creating a reusable system also can’t be overstated. Creating new code for every library means wasting time & money ‘reinventing the wheel’. It also introduces the possibility of new bugs and losing (or breaking) existing features. Plus, it can be confusing and frustrating for users to learn something new every time.

Key Innovations
With TACT, we think we not only achieved our goals, but also created one of the most powerful articulation managements tools in the virtual instrument world. Here are some of the most important and unique features:

1. Conflict Detection: TACT makes it easy to see if multiple articulations have conflicting mapping setups, for example the same keyswitch or MIDI CC value.
2. Presets: Saving or loading an entire articulation setup takes just one click, and can be easily shared with other users.
3. Automap: It’s now possible to map multiple articulations at once with almost no effort, using schemes like ascending keyswitches or split velocity range.