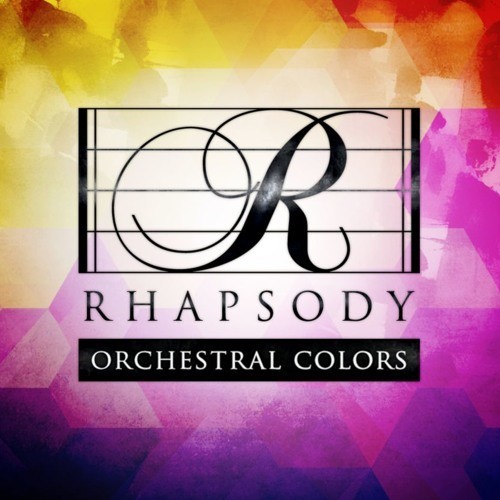 The heart of the library is the custom orchestrator engine that transforms single MIDI notes into beautiful, lush chords and textures across multiple ensembles. Unlike "pre-baked" orchestral libraries, Rhapsody Orchestral Colors gives you individual control over the voicing of each section - for example, violins/viola, celli, and basses can all play unique chords, voices, and intervals.Impact Soundworks also recorded two octaves of unison notes for each ensemble allowing you to create your own chords from scratch!

The highly flexible sound of Rhapsody Orchestral Colors, recorded with three mic positions, is suited equally to chamber music and classical mockups as it is lush film scores and epic cues. Every section has its own unique mic mix controls and output routing so you can mix each orchestral ensemble to taste. 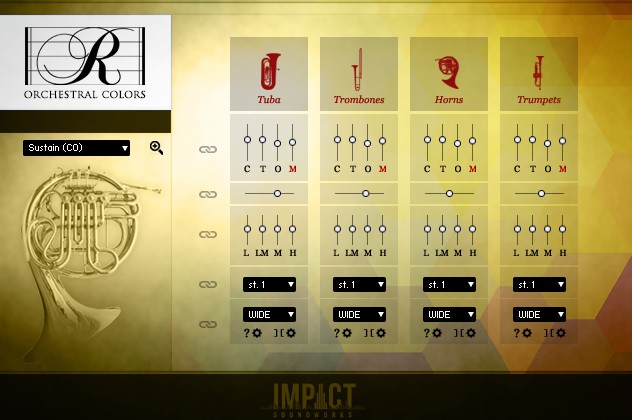 Rhapsody Orchestral Colors includes an elegant and powerful script engine that supports up to four ensembles in a single patch. Each ensemble has its own unique set of controls: mic mix, 4-band EQ, panning, Kontakt output selection, and chord voicing. Mics can even be loaded or unloaded for each instrument without affecting the others! Changing all ensembles at once is also possible with the Link control.

The custom orchestrator script is the star of the library. In this screenshot, each ensemble is set to "Wide" mode - by pressing any key on the keyboard, each section will play a pre-voiced chord with wide voicing built on the key that was pressed. Playing in the lower octaves will trigger major triads while the upper octaves trigger minor triads. We've created a huge number of other modes as well, such as:

Each section can also be set to Random or Split modes. In Random mode, the voicing used will be selected at random from a user-selected pool. This is fantastic as an inspirational tool! Split mode allows for up to three voicings to be used depending on what part of the keyboard is used.

Besides the ultra-powerful chord mode, Impact Soundworks also included Unisons patches with two octaves of single notes sampled per section. From contrabasses to violins/violas and trumpets, that's a total orchestra range of C1 to C6! The Unisons can be played in Natural mode, where each instrument triggers only in its natural playable range, or in Zone mode where each section can be assigned a different keyboard region. 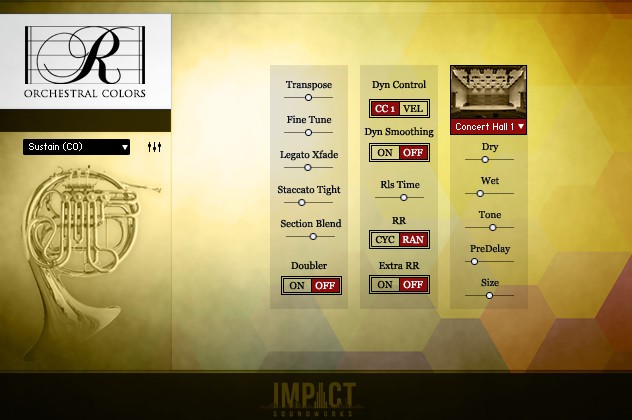 Other useful features include the Doubler, which doubles the size and width of every ensemble, Extra RR, which adds even more variations to every section (great for ostinato staccatos), and Staccato Tightness, allowing for the full range of short notes from loose and full to ultra-short and tight.