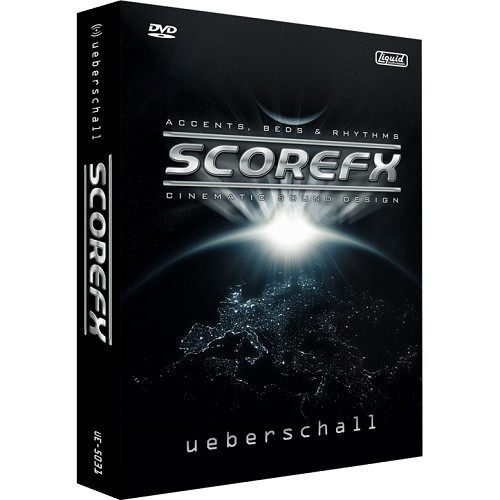 Score FX
There‘s plenty of sonic ammunition, and providing you‘re the sort of composer looking to create a soundscape (...) then the content of Score FX should be right up your street.

Ueberschalls‘s Score FX is a further volume in the Liquid Instruments series, where the phrase samples are accessed through a custom version of Celemony‘s Melodyne.
(...)
As suggested by the library‘s name, this collection is aimed at those producing music for film, TV or similar applications, and the 7 GB of sample material is therefore organised into five basic sections: accents, vocal phrases, beds, rhythms and construction kits.

As befits the title, the samples in the accents group tend to be fairly short. This section includes both sound textures and more obvious hit-like sounds, split into further named categories. Titles such as „confused“, „creepy“ and the delightful „flutyfied“ give an indication of what each offers - lots of weird, wonderul and downright scary noises, although they‘re as much sound design as musical in nature.
The vocal-phrase section is smaller, but contains some excellent ehtnic vocal wailings.
(...)
The beds category is also subdivided into named sections such as „darky“, „drony“ and „tension“.
(...)
These samples tend to be much longer, and the vast majority evolve over time to give a sense of movement.
The rhythmic category is also quite substantial, and this largely avoids more conventional drum- and percussion-based loops in favour of more off-the-wall rhythmic patterns, created with various synths and metallic sounds.
(...)
If all this wasn‘t enough, the collection is rounded off by a series of 28 Construction Kits. Each of these provides a combination of around 10 to 20 sounds designed to work toegether. These kits are a breeze to use and there‘s plenty of scope, given the number of samples provided.
(...)
There‘s plenty of sonic ammunition, and providing you‘re the sort of composer looking to create a soundscape rather than a more conventional melodic score for your footage - and that the footage needs to unsettle, or just plain scare the audience - then the content of Score FX should be right up your street.

Score FX
A very handy, excellent categorized and flexible collection of drones, atmos and rhythms that suite perfect to atmospheric-electronic movie- and gamescores.

(...)
Until now the Liquid player was more concentratig on horns, guitars, bass licks and vocals. Score FX however is something different and calls in the samples & sounds for film music.
The Liquid instrument comes with a clearly structured GUI. The browser gives you an overview over the already installed libraries. With a few clicks you can navigate to the actual sample. They can be prelistened or dragged on to the virtual keyboard. From there you can route them to different mixer outputs or enter the editor. The editor is similar to the one in Melodyne, it allows you to transpose the single notes within the sample, stretch or shorten them and all that almost without artifacts. There is even an automation function for different parameters such as volume, panorama, quantize or pitch and formant. Those can be used on single samples or on every sample. Besides that there is a countless amount of presets that save you a lot of work because you don‘t have to create your own sets - although you‘re still able to.
(...)
In a nutshell: Liquid instrument is a powerfull tool that makes sample-layering even more flexibel than usual construction-kit work.
(...)
In case of ScoreFX the presets are a very good base to start with. On the one hand the single samples are categorized in significant categories that allow you to create sets according to your curent needs. On the other hand the presets allow you to improvise to a movie that has already been loaded into your sequencer. If you are in a hurry and need to produce quick this is an extremly fast way to create layouts and demos. Just look for the moods and get going. That‘s the way it should always be!

There is plenty of material to explore. The categories accents, vocal bits, beds, rhythm and construction kits are filled with the according sample collections that can flexibly be combined with each other. It‘s just as performing a soundtrack live with the help of multisamples. Above the almost exclusively electronical soundscapes you spread a few noisy and mysterious glittersounds or strange vocal-performances. In this way you rather create moods than melodies, leads or bass phrases. The rhythms can give a soft, impulsiv or aggressive groove, a little bit synthetic, sometimes typical percussions. In this way you‘ll reach your goal pretty fast...
(...)

The sound of the material is top-notch. Everything is programmed inventively and pumping and always reaches a very homogenic result. (...)

Conclusion:
A very handy, excellent categorized and flexible collection of drones, atmos and rhythms that suite perfect to atmospheric-electronic movie- and gamescores.
(...)

Score FX
Score FX’s production quality and musicality is uniformly excellent. Make no mistake, for those willing to work within Liquid’s structure, Score FX will inspire countless ideas and deliver the caliber of results that profes

Score FX is formatted for playback in Ueberschall’s Liquid software instrument (included). Based on Celemony’s Melodyne time and pitch engine, Liquid lets you rework and tailor the content in a novel and unique way to fit your specific musical needs.

Liquid can automatically time-stretch and transpose its content to match your current session, so as you’re auditioning sounds, everything will be in the most appropriate context for your project. More importantly, assembling my own “sound banks” proved to be a useful part of my initial creative process, because it forced me to make decisions about how I wanted sounds to work together. By limiting my palette early on, I got down to the business of writing music.

Content-wise, there’s a lot to love. The beds, pads, and accents cover a vast musical landscape, from brooding, ethnictinged drones and chilling soundscapes to heart-pounding action sequences and downright terrifying atmospheres. Other highlights include a generous set of effected ethnic woodwind and vocal phrases, which call to mind Hans Zimmer’s collaborative efforts with Lisa Gerard on films such as Gladiator. Orchestral ensembles are used to good effect, giving definite Hollywood cred to a number of the construction kits.

Score FX’s production quality and musicality is uniformly excellent. Make no mistake, for those willing to work within Liquid’s structure, Score FX will inspire countless ideas and deliver the caliber of results that profes

Score FX
To be able to obtain this degree of power over a new means of composition, using a simple to operate software instrument which has no fear of key, pitch or tempo variations, is power indeed.

This review is all about sound, not music. If all you’re interested in is notes on a page, then Ueberschall’s ScoreFX is probably not for you. But if you’re writing music which might make use of unusual sound textures, or if you’re composing for films or theatre or have any other reason for wanting more unusual sonic textures in your music, then it’s a rather fascinating package.
(...)
When the entire content is intentionally abstract we’re facing an uphill struggle. Suffice it to say though that Ueberschall’s chosen method of categorising sounds is pretty effective. You can go for ‘Concern’, ‘Mysterious’, ‘Pleasing’ and many other categories, finding many variations upon each description.
(...)
So what sort of sounds can you now access from your keyboard? ‘Anticipation/Tension 03’ sounds like a looping burst on a panpipe, given a metallic edge as if being banged against an oil drum. ‘Not Safe 08’ sounds like a tablo loop processed through a synthesizer filter, while ‘Vocal Bits’ is a bending male “aaah” with a long looping echo. ‘Kaduk 01-25’ are all wailing Eastern vocals, while ‘Dark 04’ from the ‘Beds’ category is a smooth, low drone which could easily find a place in any sci-fi or vampire movie.
(...)
The Melodyne engine wasn’t familiar to me, but couldn’t be easier to use as it turns out. Switch to the Editor display and loops are divided into sections on a matrix, and any section can be pushed up and down the matrix to change its pitch. You can also change the length of sections, but they can’t be overlapped since it’s a monotimbral playback system. But taking a drum pattern already existing in ScoreFX, and turning it into a melodic tuned percussion loop more like a set of marimbas or steel pans (the soundtrack for Steven Soderbergh’s recent re-make of Solaris starring George Clooney used the latter to great atmospheric effect() is terrifically easy.
(...)
For sounds with a rhythmic element, the Tempo can be quickly halved or doubled, or varied 1BPM at a time, and events can be Quantised to fall exactly on the beat from 0 to 100 per cent. It’s also possible to Transpose the pitch of a sound completely, regardless of what MIDI key it’s assigned to.
(...)
ScoreFX then couldn’t be easier to use on a basic level, and if you have more specific needs in terms of pushing the rhythmic elements of a sound to match a beat, or moving elements of a sound to meet a ‘hit point’ in an accompanying movie, is also terrifically straightforward.

The sonic content as mentioned before is massive: all sorts of atmospheric bloops and burbles, layered voices, percussive sounds and electronic textures, and the designers quite justifiably recommend the package for use in film scores, computer game audio, adverts, trailers, websites, business logos, training videos and more.
(...)
Ten years ago, gaining access to sounds like these would mean buying a new module, or at the very least an expensive set of CD-ROMS to load into a large hardware sampler, Ueberschall’s website includes several video demos of the package in action and, as these amply demonstrate, to be able to obtain this degree of power over a new means of composition, using a simple to operate software instrument which has no fear of key, pitch or tempo variations, is power indeed.

Score FX
Score FX is the best priced Liquid Instrument. You can‘t do anything wrong with this one if you are looking for such sounds. (...)

There are many ways to connect audio and video for example in creating a musicvideo, creating commercials or doing the post-production for a movie and score already existing material - frame for frame. For this work Score FX shall be a good supporter (...). Let‘s see which genres can be covered by Score FX.
(...)
Score FX uses complexe sounds and sound designs. That‘s why some samples only consist of a single “blop“ (to keep the melodyne language). In this case pitching can only effect the whole sample. The advantage is not exclusively within creating new melodies, which is still possible with “multi-blop“ samples, but in stretching sounds to the length of the scene. Besides that you can reach nice effects with the automation sliders of Liquid or you can change a certain theme for different characters within the movie and still keep the original mood. The base for this can be one of the 28 Construction Kits plus 954 accents and hits, 198 beds and 362 rhythm phrases.
(...)
The samples are a good mix of different moods but the majority is heading towards dark, thrilling and mystical moods. Really “happy“ sounds are not covered.
(...)
Conclusion:
Score FX is a good pool of samples that can easily be used. The possibilities of the engine allow you to design and edit the sound and still keep the high quality. All in all for a moderate price.

Score FX is the best priced Liquid Instrument. You can‘t do anything wrong with this one if you are looking for such sounds. (...)